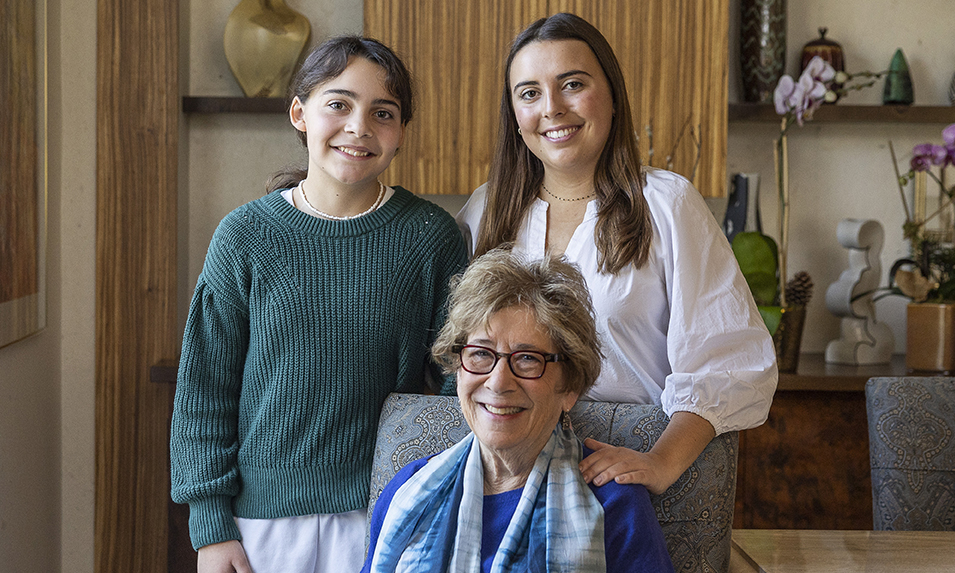 “The more we change, the more we have to learn,” says Claudia Kadis ’65. Her new gift will establish the Dylan Rose Kadis and Eloise Hall Kadis Distinguished Professorship in Women’s, Gender, and Sexuality Studies (WGSS) and will represent the bulk of an expected $1 million investment in UNC Greensboro’s WGSS program.

This is the fifth professorship established during Light the Way: The Campaign for Earned Achievement. This comprehensive fundraising campaign seeks to raise $200 million to increase access, elevate academic excellence, and enhance the tremendous impact of UNCG’s programs.

Kadis believes that this professorship will allow WGSS to identify and support innovative faculty leaders. “I hope that there will be someone who can come up with outside-the-box ideas to explore,” she said. “This gives a faculty member the opportunity to explore what they are passionate about and gives the University the opportunity to select someone they may not otherwise be able to bring to the school.”

The University expects the full value of this gift to be $1 million. In addition to Kadis’ $666,000 gift, UNCG is seeking $334,000 in matched funding from the State’s Distinguished Professors Endowment Trust Fund.

The Spartan WGSS program is one of the oldest in the nation and just celebrated its 50th anniversary. Finding its origins as a faculty-student committee in 1972, the program’s scope has expanded, evolved, and thrived over the years. It now includes not only undergraduate offerings, but also one of the only master’s degrees of its kind in the Southeast.

Program Director Dr. Lisa Levenstein explains this evolution. “Reflecting trends in the field of study, we began as ‘women’s studies,’ became ‘women’s and gender studies’ in 2002, and ‘women’s, gender, and sexuality studies’ in 2017,” she says.

Claudia Kadis embraces this spirit of change with her transformational gift. “What they’re doing in the WGSS program now far exceeds what my vision of women’s studies was when I was in school from 1961 to 1965,” says Kadis. “I’m proud to be associated with a school that is so eager and willing to reach out to such a broad spectrum of students.”

“This gift marks a true milestone,” said Dean John Z. Kiss of UNCG’s College of Arts and Sciences. “Claudia’s gift will help one of our most interdisciplinary programs attract and retain dedicated faculty who will continue its tradition of fostering critical inquiry and social awareness. Her gift honors the women of the Woman’s College era as well as all of today’s students.”

Her new gift builds on previous contributions to the Spartan community, including the Claudia and Bobby Kadis Graduate Scholarship for Studio Arts and the Claudia Buchdahl Kadis Merit Scholarship in Arts and Sciences. About philanthropy, Kadis says simply, “Commitments like mine show that we can do good things and we should do good things.”

This professorship is named for her granddaughters, who were also the namesakes for the Dylan Rose Kadis and Eloise Hall Kadis Women’s Lecture Series, which has brought several speakers on women’s, gender, and sexuality issues to campus. Part of Kadis’ goal for these gifts is to pass a spirit of philanthropy to the next generation.

“My granddaughters are 10 and 21 and I want them to be inspired to share their good fortune in the future. I want to encourage the next generation to be philanthropic,” she says. Kadis hopes that today’s students will advocate for themselves, for their University, and for individuals who may be marginalized. She honors the forward-looking nature of UNCG’s commitment to diversity, equity, and inclusion.

“Everyone can give something,” she says, “You can put a smile on someone’s face and let them know that you believe in what they are going to accomplish.”