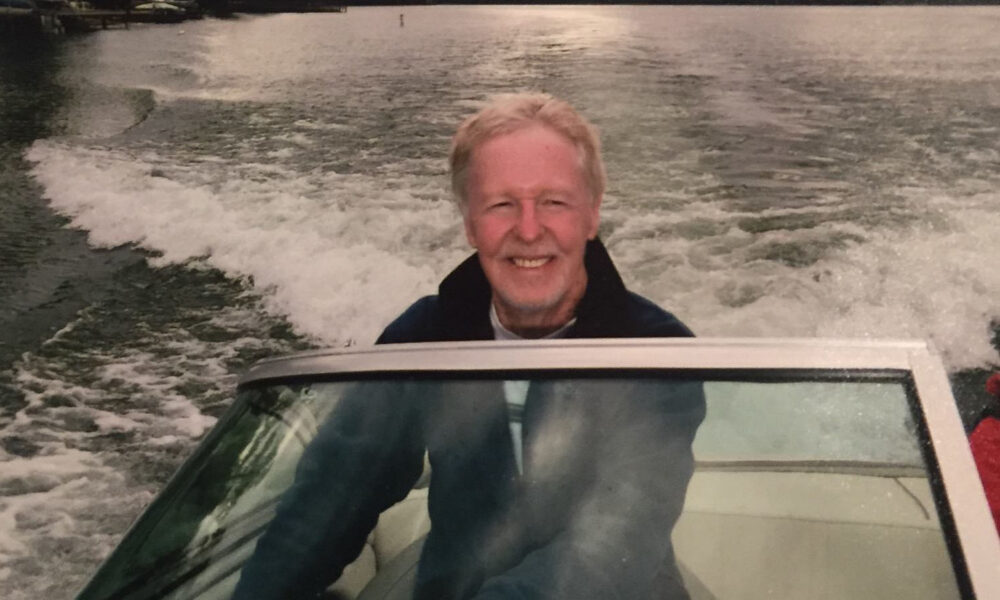 With nearly $4 million in gifts, James Dutton created impact for the ages

Greensboro native James Dutton loved volleyball, playing competitively well into his sixties. As he decided how to make an impact as part of UNC Greensboro’s Light the Way campaign, his strategy was simple: invest in the future success of UNCG Women’s Volleyball.

His impact on the lives of future UNCG student-athletes will be incalculable.

Dutton, even with his health declining, came to one final UNCG game this autumn to support his favorite team. “James reveled in the spirit of competition and the value of teamwork,” said Mike Roach, executive associate athletic director for external operations. “He told us, ‘I want to help these Spartan student-athletes reach even greater heights.’ Being with him as he pulled for his favorite team was tremendously inspiring.”

James Dutton passed away on Oct. 23, we are sad to report. The legacy he leaves is far-reaching. Memorial messages on his obituary page show the friendships he enjoyed and special times remembered.

His legacy at UNCG will endure through generations of student-athletes.

His nearly $4 million in giving to UNCG this year marks the largest sum in UNCG Athletics history.

His recent $2.2 million planned gift was first made public during UNCG’s Celebration of Philanthropy event and the Celebration of Women in Sports events at Homecoming.

“Along with his prior gift, six volleyball scholarships are funded by Jim’s generous giving. That accounts for half of those allotted to volleyball,” said Brian Mackin, UNCG athletic director. “This transformational gift is an investment for future Spartan Volleyball student-athletes and the UNCG Athletic Department.”

Dutton’s 1.6 million gift announced earlier this year will provide for the following:

UNCG Chancellor Franklin D. Gilliam, Jr. said, “We mourn the loss of James Dutton. Jacquie and I extend our deepest sympathy to all those who were closest to him. His legacy will provide our student athletes the opportunity to thrive in the classroom and on the court for many generations to come.”

Dutton grew up near UNCG (then known as Woman’s College) in the 1940s and 50s, on nearby Tate Street. He attended Curry School, a teacher training school near the heart of the campus, and remembered those school days – and the special beauty of the UNCG campus – with great fondness.

He received his bachelor’s degree in business administration in 1965 at UNC Chapel Hill. He also took courses at UNC Greensboro.

Dutton’s gifts are part of the Light the Way campaign, which seeks to raise $200 million to increase access, elevate academic excellence, and enhance the tremendous impact of UNCG’s programs.

To learn more about UNCG’s Light the Way: The Campaign for Earned Achievement or how to create a lasting legacy at UNCG through planned giving, contact David Landers, director of Planned Giving, or visit lighttheway.uncg.edu.