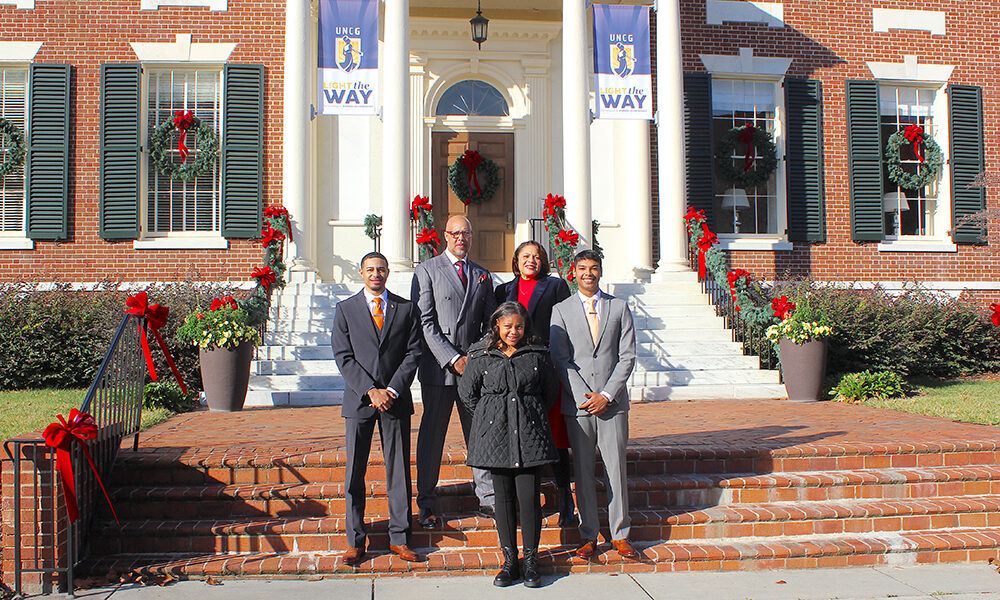 Putting hope in the hoop

Kevin Graves ’04 believes basketball is a key component to UNC Greensboro’s future success, and his recent gift is a testament to that conviction.

Graves has pledged $275,000 to the UNCG Men’s Basketball Enrichment Fund, which helps support some of the team’s greatest needs. His donation represents the largest commitment UNCG Athletics has ever received from a minority donor.

“Kevin has always been very passionate about UNCG and the development of young people,” UNCG Men’s Basketball Coach Mike Jones said. “This generous gift helps both in a tremendous way and helps elevate our program as we compete within the SoCon and nationally. We are so grateful for his support of men’s basketball.”

There also weren’t any baseball or softball fields on campus. But, remaining close to the University, he’s seen the athletics department transform over time – especially the men’s basketball program.

“I didn’t play basketball at UNCG but a lot of my fraternity brothers did, and I was always connected to the basketball program in some way.”

As a student Graves worked part-time at UPS, often shifts from 11 p.m. to 5 a.m., and held a full-time job with a lawn care company while taking a litany of science courses in the day. In the middle of his undergraduate studies, he made the decision to go into the US Air Force and utilize the G.I. Bill to pay for his education.

After serving eight years in the Air Force, he returned to the University in 2003 to complete his bachelor’s degree in exercise science and sports studies, and to start his master’s degree in community youth sports development.

By then, UNCG Athletics had blossomed.

“The growth has been impressive,” said Graves. “That’s why I give. And the men’s basketball team is the highest revenue-generating sport, and it has the most visibility. So, I believe basketball can help propel UNCG forward.”

Basketball and giving back have gone hand in hand in Graves’ life. As part of his master’s degree program, Graves worked with UNCG Kinesiology Professor Dr. Tom Martinek on initiatives like Project Effort, an afterschool program which uses sports to foster personal and social responsibility among underserved youth. Then in 2009, with support from some of his Kappa Alpha Psi fraternity brothers, he created the Karolina Diamonds, an AAU team designed to provide athletics, professional, and cultural education to underserved youth in the Triad region. Now he also runs SWG Consulting LLC, a firm that manages professional athletes – primarily NBA players – to help make their lives easier.

Graves has also assisted in establishing four scholarships at UNCG, and he recently joined in the Light The Way campaign efforts as a member of the Athletics Campaign Committee, which intends to raise $17 million toward the overall $200 million goal.

All in all, Graves has been an advocate of UNCG for the last 18 years.

So why is he making a splash with his latest gift?

“I’m not really big on attention, but I was told I should start publishing gifts so I can start influencing other people,” said Graves.

“I want to inspire people to give.”

Learn more about Light the Way: The Campaign for Earned Achievement and how to join Kevin Graves in making a difference at lighttheway.uncg.edu.

By Brittany Cameron.
Courtesy photographs of Kevin Graves with his family on campus and with client Bam Adebayo.