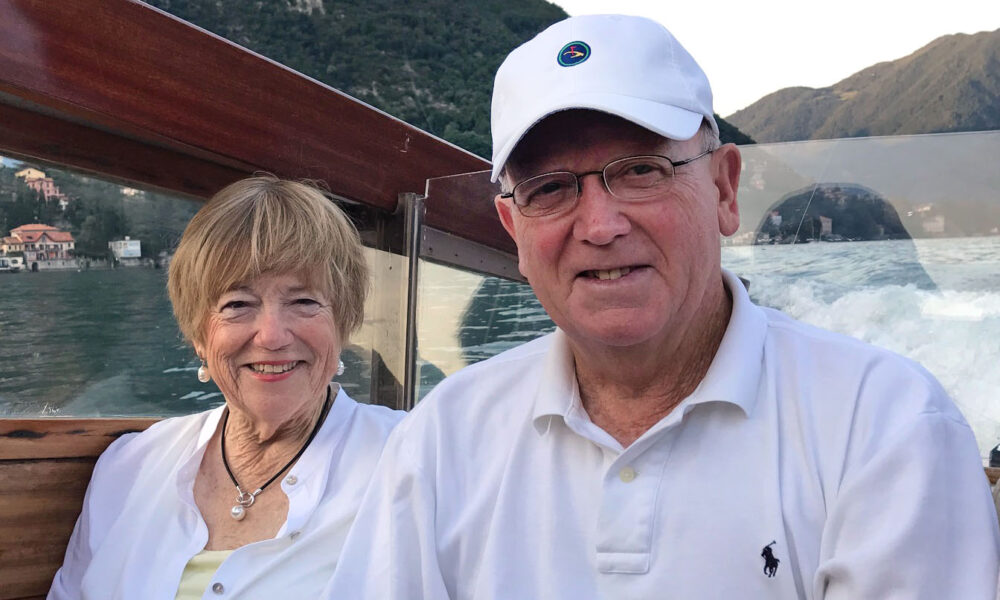 Pam and David Sprinkle were recognized as Greensboro’s Outstanding Philanthropists by the Association of Fundraising Professionals NC Triad Chapter during the National Philanthropy Day Awards ceremony on Nov. 22 at the GTCC Conference Center.

The Sprinkles have been active volunteers and loyal donors to UNCG for over 30 years. In addition to David’s service on the Light the Way campaign cabinet, they have contributed over $1 million to Light the Way: The Campaign for Earned Achievement, the major fundraising initiative to strengthen the future of the University.

The Sprinkles view philanthropy as a way of life. Long ago the couple pledged to donate 10% of their income annually, but their desire to give back extends beyond financial support. Pam and David have served in numerous volunteer capacities throughout UNCG. David Sprinkle served on the UNCG Board of Trustees from 2010 to 2021, including service as board chair for two years and several years as chair of the Finance and Administration Committee. Both Pam and David have served together on UNCG’s Board of Visitors and the UNCG Excellence Foundation Executive Committee. Pam served on the Friends of the Libraries Board and was instrumental in securing the future of the series now known as the Pam & David Sprinkle Children’s Book Author and Storyteller Series.

“Pam and David have been longtime leaders and advocates, lending their time, expertise, and passion to causes that have not only benefited students at UNCG, but also the greater Greensboro community,” said Chancellor Franklin D. Gilliam, Jr. “They are also among the most kind-hearted and thoughtful people I know.”

The Sprinkles’ impact at UNCG can be seen in many programs and spaces across campus. Their generous contributions during the Light the Way campaign have included support of the Chancellor’s Greatest Needs Fund, the College of Visual and Performing Arts, Spartan Athletics, the School of Health and Human Sciences, the University Concert & Lecture Series, Faculty Summer Enhancement Fund, University Libraries, Weatherspoon Art Museum, UNCG Guarantee Scholarship program, and the Bryan School of Business and Economics. Through their generosity, the College of Visual and Performing Arts was able to renovate a 140-seat performing arts space in the Brown Building, a space now known as the Pam and David Sprinkle Theater.

Jade Young, a senior majoring in theatre with a minor in American Sign Language, is a UNCG Guarantee scholar. The program, which the Sprinkles support, provides scholarships and mentoring to students from North Carolina with significant financial need. Young said, “I wouldn’t be in the arts program without the Sprinkles. I’m not sure I would even be able to afford to go to university. They have lightened my financial burden and, with the UNCG Guarantee, they’ve given me a family.”

UNCG Board of Trustees Chair Betsy Oakley said, “The Sprinkles have been participants and contributors to the Greensboro community for many years. Not only do they lead by example, they constantly challenge those around them to step up to the plate and do all that they can.”

The Sprinkles have made Greensboro their home since 1971. Charitable and community organizations throughout Greensboro list Pam and David Sprinkle among their benefactors. The Sprinkles are well known for their ability to motivate and engage others to join them in giving back. Through the years, the couple’s enthusiasm has inspired many others to become involved, give, or increase their giving.

David Sprinkle said, “Philanthropy to us is sharing our blessings, not just our financial blessings, but all our blessings – our energy, our skills, our time, and our love of life. To those who much is given much is expected. We have been very blessed and are committed to being generous with our blessings.”

A former librarian, Pam Sprinkle received her BA in English from the University of Richmond and her MLS from UNC Chapel Hill. David Sprinkle served in the US Army and received a Bronze Star Medal for his service. Now retired, he was the president and CEO of The Todd Organization and a leading salesperson for Northwestern Mutual Life Insurance Company. David received a degree in economics from Davidson College and an MBA from UNC Chapel Hill. The couple have two children, D. Phelps Sprinkle and Ellen Sprinkle Thomas, and six grandchildren.

See a video, produced by Fox 8, about the Sprinkle’s here.