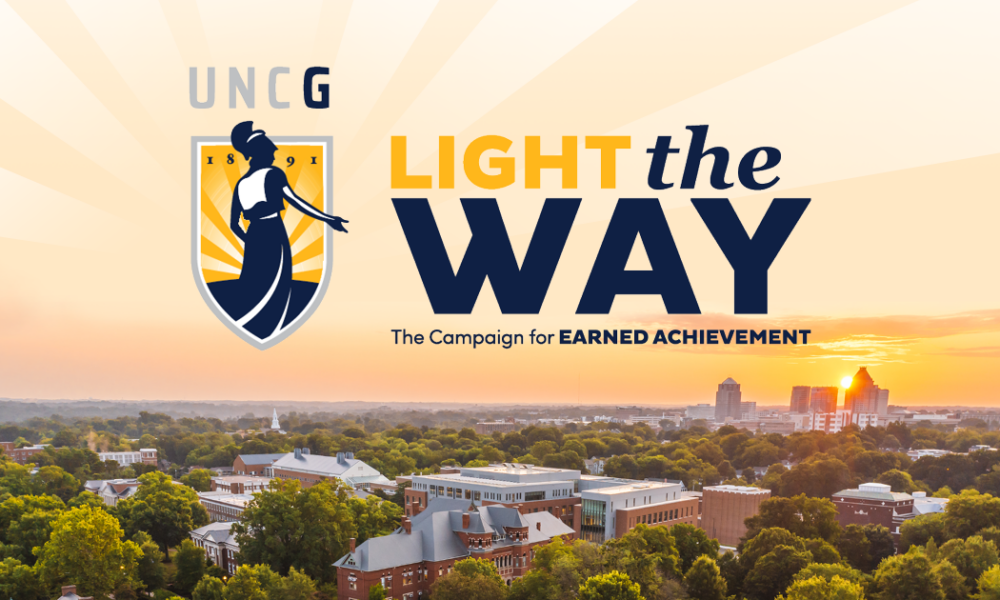 Oct. 5 marked the biggest fundraising announcement in the history of our university.

UNCG launches Light the Way: The Campaign for Earned Achievement.

“For 130 years, UNCG has been teaching students to look forward, innovate, and break down society’s barriers – big and small,” said UNCG Chancellor Franklin D. Gilliam, Jr. “To continue on this path we need to be bold, imaginative, and courageous. Our pursuit to transform students, knowledge, and the region is relentless. This campaign will light the way forward.”

“You want some swag?” Gilliam called out to students in Moran Commons, with Kaplan by his side offering students additional Light the Way items such as pins, sunglasses, and light-in-the-dark Frisbees.

“This is Light the Way, our big campaign. A lot is for student scholarships,” the chancellor told them.

Tables were situated around campus, where volunteers gave out goodies and helped build excitement for the campaign. Safran gave out her last items just before noon, coincidentally to a student who’s received a scholarship: Sloan Scholar Amelia Hanson, a first-year biology major from Lenoir, NC.

A highlight for the campaign launch was a celebration in the Elliott University Center Cone Ballroom at 1 p.m. Hundreds of students as well as faculty and staff took part in the event, enjoying cupcakes, picking up some swag, taking photos with friends, and learning about Light the Way.

At dusk, an installation of 1,800 lights sparkled on Kaplan Commons. They represented over 18,000 unique donors during the quiet phase of the campaign.

The quiet phase is certainly over, as the campus’ most ambitious fundraising goal ever has been announced. Light the Way has already raised over $113.7 million from over 18,000 unique donors during the earlier phase. Funds raised will be strategically directed toward the campaign’s three ambitions.

Light the Way will raise $100 million to address one of the biggest challenges facing those who wish to pursue higher education: student and family debt. This campaign will fund more scholarships to provide gifted students with access to high-quality, low-cost education. In addition to growing need-based support, the campaign places a strategic focus on merit scholarships and scholarships for students from middle-income families. To date, 120 endowed scholarship funds have already been created.

Attracting and retaining world-class faculty is critical to UNCG’s academic distinction. The campaign will raise $40 million for endowed professorships, more than doubling the current number. Endowments have been established to fund four professorships during the initial phase of the campaign.

Finally, Light the Way will generate $60 million to create powerful new academic programs, invest in research and development, support athletics and the arts, engage the community, and strengthen UNCG’s presence regionally and beyond. Contributions have already been made to establish 176 new program funds.

Each member of the UNCG community has a role to play in this campaign. Get involved right now!

Complete information about Light the Way: The Campaign for Earned Achievement, including ways to get involved, may be found at lighttheway.uncg.edu.