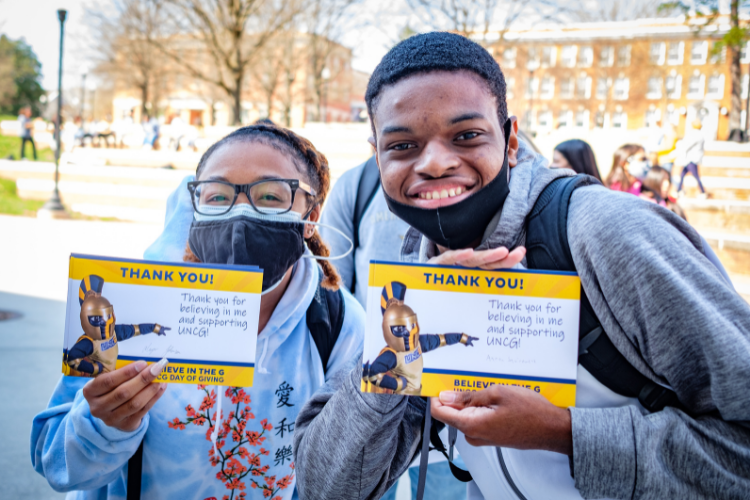 A record-setting Believe In The G

During UNCG’s Believe in the G annual day of giving on March 15-16, alumni, students, faculty, staff, parents, and friends banded together to make a huge impact.

A record 1,802 donors contributed a total of $1,077,204 to the UNCG schools, units, and programs they care about most. Those figures make Believe in the G 2022 the most successful giving day in University history.

The impressive amount raised represents a nearly 30% increase from last year’s Believe in the G and a 57% increase in the number of donors who contributed!

Over 40 match and challenge gifts incentivized giving by allowing dollars to go farther. In total, $393,934 additional dollars were “unlocked” by contributions made toward matches and challenges.

Spartan Squad Ambassadors, those willing to use their personal networks to spread the word about Believe in the G, raised $21,459 through their outreach.

This year, student giving grew by nearly 1,000% thanks to a successful Student Philanthropy event held at Moran Commons on the first day of Believe in the G. In addition to contributing a total of $2,632, students also wrote 1,500 thank you cards to be mailed to Believe in the G donors.

Gifts contributed during Believe in the G are part of Light the Way: The Campaign for Earned Achievement. The Campaign has currently raised $131,273,830 toward its $200 million goal.